The psycholinguistic stage in translation research

The first attempts to peek into the translator’s black box were made possible by K. Anders Ericsson & Herbert A. Simon’s (1980, 1984) work on a data collection technique known as think-aloud method. They worked within the information-processing paradigm and claimed that introspective verbal reports provide valid data to access somebody’s stream of thoughts while performing a task. Basically, subjects would be requested to carry out a task while thinking out loud. Recordings of the sessions would be transcribed in protocols (TAPs), which could then be analyzed.

In 1982, Ursula Sandrock completed her Staatsarbeit (similar to an M.A. thesis) on the application of the Think-Aloud technique to analyze the translation process at the University of Kassel, (West) Germany. In 1984, Sandrock and her supervisor, Hans Wilhelm Dechert (whose specialty was contrastive psycholinguistics), presented a follow-up paper at the 3rd Colchester Second Language Acquisition Workshop, which would be published in 1986. The manuscripts circulated in advance and Pamela Gerloff, Frank G. Königs, Hans P. Kringsand Wolfgang Lörscher published works using TAPs also in 1986. Other researchers, such as Hans Hönig, Riitta Jääskeläinen, Paul Kussmaul and Sonja Tirkkonen-Condit, would soon join them.

These early psycholinguistic studies (inspired by the information-processing paradigm) focused on the workings of language and communication in a mind conceived of as an isolated, mechanical manipulator of symbols. Translation was seen as a series of problem-solving tasks or as an overall problem-solving process and research widened to cover topics such as strategical and routine behavior, macro- and microplanning, problem identification and solution, often mixed with immediately observable behaviors such as corrections and use of dictionaries. The first experiments were carried out using foreign language learners as subjects, with no translation briefs and under loose laboratory conditions. 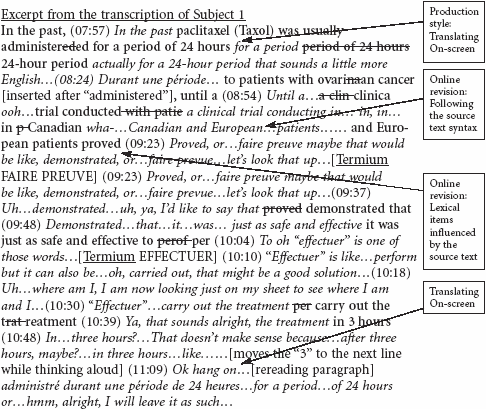 Professional translators were often found to process larger ST units, to make more inferences, to resort more to their world knowledge and also to display more strategic behaviors than unexperienced (often younger) trainees, but results became increasingly puzzling or even contradictory. Criticism mounted on research methods, but back then introspection was the best approach available, so it just diversified into monologue protocols, dialogue protocols, and group protocols. Retrospective interviews were also used, which bridged translation research and interpreting research. Mistrust of the very notion of accessing the real stream of thoughts grew stronger.

This time, however, the empirical research on the mental processes of translation and interpreting had reached a critical mass and had settled as a distinct research domain within Translation Studies, witness the special issue ofMeta 41/1, edited by Königs, and the focused meetings in Jyväskylä (1996) and Savonlinna (1998) hosted by Tirkkonen-Condit and Jääskeläinen. Thus, rather than leading the whole enterprise again into dire straits, the difficulties were simply interpreted as the end of a stage, the passing of the torch to a new generation of researchers (see annotated bibliography in Jääskeläinen 2002).

The days are gone when we believed that there are certain behavioural patterns that are necessary to achieve success in translation. We know by now that time factors, access to translation aids, leisured production, or professional routines do not account for success. […] One of the main findings from the research based on think aloud data, and from process research at large, is that it is dangerous to make sweeping generalizations about translation processes. There is wide individual variation in the processes of novices as well as those of skilled professionals. It has turned out, for example, that professional status does not necessarily guarantee high-quality performance, and conversely, that novices’ performance may manifest features of expertise.